The Dragon and The Queen by Kaitlyn Davis

Series: The Raven and the Dove #3 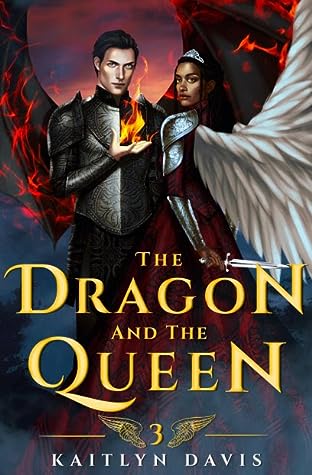 A queen foretold to save the world…

Free from Malek’s clutches, Lyana returns to the world above determined to keep the isles from falling. But in a land where magic is forbidden, convincing the avians to believe in her power takes the one thing she doesn’t have—time. With Xander’s help, she must unravel the puzzle of the rift and gain their trust or lose her home forever.

A dragon in search of his destiny…

Turned into a monster by the king he loathes, Rafe flees Da’Kin. Yet even with the help of his crew, he can’t outrun the new power simmering beneath his skin or the gruesome visions haunting his dreams. A dark spirit calls out to him, and soon he’ll have to answer.

New enemies change the game as the final battle draws near…

Stuck in her spirit form, Cassi is at the mercy of the man she betrayed. Before he wreaks his vengeance, she must tell someone what she witnessed in the sacred nest. A demon walks the earth, an evil no one anticipated. But with all her friendships broken, who among them will believe her?

Order The Dragon and The Queen here:

The 5 star reviews are always the hardest to write. When a book grips you, almost stops your heart repeatedly and makes you cry and pray for the characters you love so much, it’s hard to put it all into words and do it justice. But here I am, trying to do just that with The Dragon and The Queen.

I’ve been reviewing this series since The Raven and The Dove, book one, released and even though I loved it from the first page, it’s fantastic to see how much this series has grown. The Dragon and The Queen, the third book, is now my favorite book in the series! The character growth in it is perfection! Seeing how much Lyanna, Rafe, Xander and Cassi have evolved into such powerful characters is fascinating. Even Malek!

The action scenes were riveting and I was glued to every page. Honestly, I couldn’t read it fast enough because I just wanted to KNOW everything but I also didn’t want to reach the last page because then the book would end. The characters deeply emotional connections, their selfless actions, the true love they had for each other really glowed through it all. The pining was breathtaking! The friendships and how these characters bonded, even through their mistakes, were amazing moments too. I couldn’t put my Kindle down.

The fact that this is the third book in the series makes it harder to write a review without spoiling it. But I don’t want to spoil it, if you like fantasy stories you NEED to read this series. It’s so worth it! This world is pretty magical, these characters are flawed and amazing, the plot is impressive and there are a lot of surprising twists and turns with great action scenes. The story flows beautifully and the ending… explosive!

The Dragon and the Queen was a mind blowing roller coaster. I’m crazy in love with this series! The world building, the character development, the magic system, the story telling were amazing and all of these characters stole my heart. Can’t wait for the next book, that I already need desperately!

Always blessed with an overactive imagination, Kaitlyn has been writing ever since she picked up her first crayon and is overjoyed to share her work with the world. When she’s not daydreaming, typing stories, or getting lost in fictional worlds, Kaitlyn can be found playing fetch with her puppy, watching a little too much television, or spending time with her family.

3 thoughts on “Review: The Dragon and The Queen by Kaitlyn Davis”