his happily ever after with sassy, rebellious Crystal Moon.

A new, emotionally riveting, sexy standalone romance by New York Times bestselling author Melissa Foster. Watch mysteriously sexy Bear Whiskey claw his way to his happily ever after with sassy, rebellious Crystal Moon. In TRULY, MADLY, WHISKEY… Eight months is a long damn time to have the hots for a woman who keeps a guy at arm’s length. But Crystal Moon is no ordinary woman. She’s a sinfully sexy, sass-mouthed badass, and the subject of Bear Whiskey’s midnight fantasies. She’s also one of his closest friends. Just when Crystal thinks she has her life under control, scorching-hot, possessive, aggressive, and fiercely loyal Bear pushes all her sexual buttons, relentless in his pursuit to make her his. The more Bear pushes, the hotter their passion burns, unearthing memories for Crystal that are best kept buried. But there’s no stopping the collision of her past and present, catapulting the two lovers down an emotional and sexually charged road that has them questioning all they thought they knew about themselves. 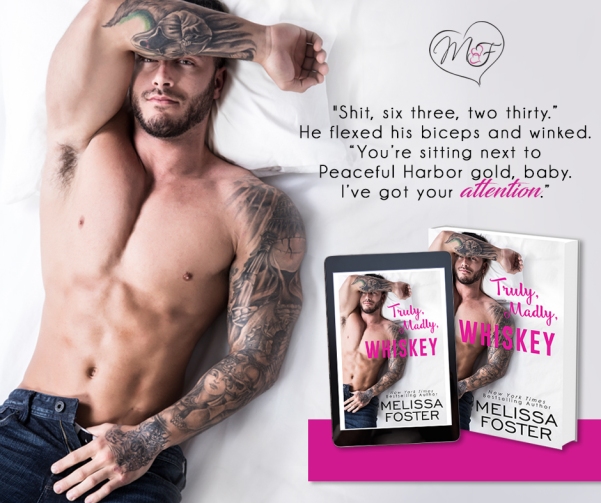 Truly, Madly, Whiskey is Bear’s story! I was really curious about him, I just can’t resist a sexy tattooed biker boy and Bear didn’t disappoint me!

Bear waited patiently during months for a chance with Crystal. He knows she’s attracted to him but she keeps him at arm’s length, so he’s slowly giving her time to get used to have him in her life. He’s taking his time, trying to be always present in her life, especially when she’s spending time with their mutual friends (I loved True and Gemma’s interactions and the way they were supporting Bear and Crystal and their relationship). In fact, they’re practically on a relationship even though there’s no make out sessions or sex. Yet. Bear is amazing, maybe a little bit too possessive sometimes (an alpha male of course!), he’s the perfect combination between hot, sexy, sweet and caring. His devotion to Crystal, the way he treats her and how he puts her feelings first is absolutely heart warming.

Crystal is not exactly what she seems to be, she tries hard to come across as a tough woman, happy with her one night stands and rough bikers, but that’s just a mask. Her past is heartbreaking and there’s a very good reason for the way she behaves with everyone around her and with Bear particularly. I admired her bravery, especially when she seeks the help of her therapist again and when, shortly after, she finally has a meaningful conversation with Bear about how her past shaped her personality and her relationships.

Will Crystal be able to trust Bear and let him in her heart? You have to read their angsty, heart warming, sexy story to find out!

Melissa Foster has a way to tug our emotional strings and she does it again especially with Crystal’s past, I mean when Crystal finally opens up with Bear… it’s so heartbreaking and emotionally charged, it’s fabulously written.

Truly, Madly, Whiskey is a beautiful, emotional read, a passionate romance with plenty of funny banter and a perfect book boyfriend. It can be read as a standalone but, in my opinion, you should definitely read Tru Blue first. Can’t wait for the next books featuring Bear’s siblings especially Dixie’s! 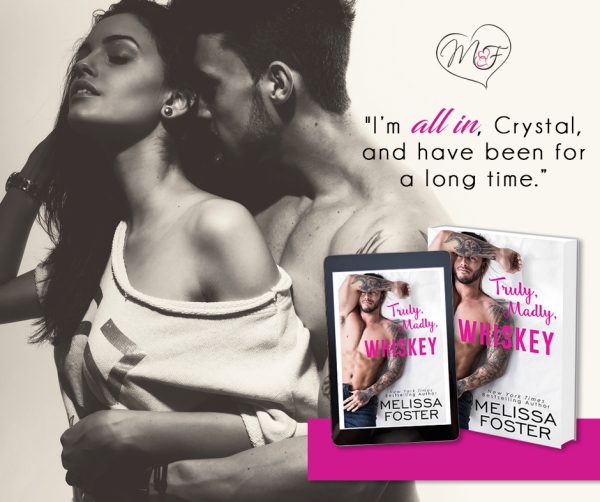 “Really, Bear. I can drop you at your place before I go to the fabric shop.” Crystal started the car, feeling more in control than she had inside the shop. She hated the way she’d frozen up when things had gotten hot between them. She wanted him. After putting herself through three years of therapy, dealing with not only the trauma of the attack, but the bullshit with her mother and the loss of her father, she was sure she could handle anything. She’d dated other guys since she’d left college without issue. Why did it have to be different with the only guy she wanted to be close to? It pissed her off that her past still owned a piece of her, and she needed to get over it before Bear got fed up and walked away for good.

“I have to go to the store anyway.” He flashed one of his smiles. “We might as well go together.”

“You need to go to the fabric store?” she said flatly, knowing he was bullshitting her. She realized her car smelled different, cleaner. The seats were shiny, the dashboard dust free. “Did you clean my car?”

“Detailed it,” he said casually, as if he did this type of thing every day. For all she knew, he did. “Changed your oil, topped off your fluids. You really need to do those things every three thousand miles.” He touched the doll hanging from her rearview mirror. “I dusted off this, too, even though I’m a little worried that it’s a voodoo doll.”

She wasn’t about to tell him it was a worry doll that she loved more than life itself.

“Bear.” She couldn’t suppress her smile about the voodoo doll as she drove toward the store. “You really need to stop acting like you have to take care of me. I appreciate you handling the inspection, which I’m paying you for, by the way. But you don’t have to do all these things for me. I already like who you are.” Even if I have a hard time showing it.

Why is that such a turn-on?

“I didn’t do it to get your attention. Shit, six three, two thirty.” He flexed his biceps and winked. “You’re sitting next to Peaceful Harbor gold, baby. I’ve got your attention.”

She couldn’t suppress a laugh. “That you do, and probably half the women in this town.”

He kept her laughing the whole way to the fabric store, and it was just what she needed. It really had been a long day. They’d hosted three parties, and one of the mothers was just about the most obnoxious woman on earth. She’d pushed her daughter toward pink frilly outfits for the first half hour, when all the little cutie had wanted was to dress up as a skateboard princess. Gemma realized Crystal was going to strangle the wench, and she’d calmly suggested the woman head down to Jazzy Joe’s for coffee. The rest of her day hadn’t been much better. Plus, she’d spent the morning overthinking everything about her relationship with Bear, which was probably why she’d freaked out when she’d really been dying to kiss him.

She parked in front of the fabric store. There were some things that just didn’t fit in the world as Crystal knew it, and Bear Whiskey clad in a tight black T-shirt that said Whiskey Bro’s across his massive chest, a pair of snug, low-slung black jeans, and leather boots strutting into Jennilyn’s Fabric was on the top of the list.

She pulled her list from her bag as his eyes coasted over the store. What was he thinking, coming with her? That was dedication she could not ignore. The epitome of commitment.

She toyed with that as he draped his arm over her shoulder. She wondered what had taken him so long. She’d expected him to do it the second she’d stepped from the car, but he was probably in shock that they were actually going to a fabric store. She smiled to herself as he leaned closer and rubbed his nose along her cheek.

“Can I help you?” she asked with a laugh.

“You smell like jelly beans, and I happen to have a thing for sugary goodness.”

“You can’t seriously have that good a sense of smell.”

He pressed an unexpected, and deliciously warm, kiss to her cheek and reached into her purse, withdrawing a bag of jelly beans. “Hoarding? Or were we going to hide these later in your body and let me find them?” He moved his mouth beside her ear and whispered, “Blindfolded. With my hands tied behind my back.”

He nudged her deeper into the store. Holy crap. She’d stopped walking. Was she breathing? And was that a thing? Blindfolded? Hands tied behind his back? Oh, the control that would give her. She’d be at no risk of being overpowered. But would she want that much control? She imagined herself lying naked on her bed, watching as his greedy mouth moved over her breasts, down her belly, and she felt herself go damp.

Her body continued vibrating from the inside out. This was bad. Really, really bad. Like a virus she couldn’t shake. She needed an anti-Bear pill. Stat! 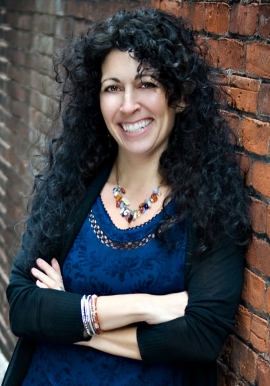